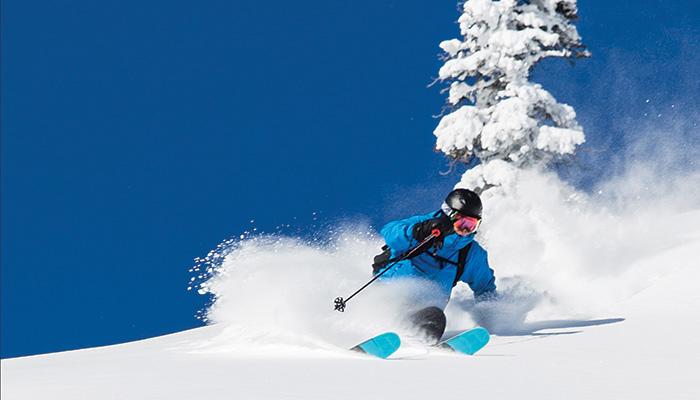 “Best in class! In wet, wind-drifted snow it felt light and responsive.  Lightweight and other Finesse skiers will love this ski. Nimble yet stable.”

The Soul 7 succeeds because it retains its poise in stressful conditions, like choppy snow in low light.  While you won’t actually be able to see any better, the Soul 7 has a knack for smoothing out rough terrain so at least you’ll feel more confident.

Lightweight and easy to flex, the Soul 7 is a natural fit for the so-so skier who wants to achieve overnight proficiency off-piste.  The only fly in this ointment is the typical recreational skier has difficulty finding a high edge angle on a relatively narrow ski; on a tool 106mm underfoot, John Q. Public may never roll the ski to a high enough edge angle to carve a continuous arc.

But if you already know how to carve a turn with a broad-beamed ski, the Soul 7 can match you step for step.  It substitutes pep for power, with an energetic ping off the edge to propel the pilot into the next arc. Neither a surfer nor a charger, it uses its quick reflexes and soft, rockered extremities to maneuver through moguls and tight trees.  More than a mere powder ski, the Soul 7 has an appetite for any condition on the menu, but if allowed to order for itself, of course it’s going to ask for two feet of fresh.

For the Finesse skier who skis most of the time in an upright stance, the issue with this category is that it can take too much effort to tilt the ski to a high edge angle where it will ride a clean edge instead of smudging its way through a perpetual drift.  The Line Supernatural 100 solves this conundrum by finding the edge early and letting itself be steered even if there’s only a few mm’s of ski in the snow.

Line began by making the mini-skis known as skiboards, branched out to twin-tip Pipe & Park skis and gradually infiltrated the all-mountain segment without ever losing their allegiance to the youth market.   Based on their history and reputation, you’d expect all Lines to be center-mounted and smear every turn like a butter knife.  Yet Line has been making directional, cambered all-mountain skis for years and anyone whose nickname isn’t Mongo should consider them a viable option.

“Smooth like aged Scotch,” muses one tester, putting his finger on the attribute that best defines the Line Supernatural experience. The Supernatural 100 is so supple it feels like it would wrap around an ice sculpture, yet when given full throttle it holds its own.  As another tester proclaimed, “Fun, stable and responsive.  Can do quick chute turns, straight line or carve on edge.”  That’s a testament to virtuosity that’s hard to beat whether you’re part of the youth market or partly responsible for the youth market.

The Kenja is one of the last iconic Völkls to go through the modernization process that inevitably added rocker to what was once a traditional, fully cambered baseline. Being the youngest child can have its benefits, for Völkl learned from its elder siblings that retaining a soupcon of camber underfoot accented the agility that makes the new Kenja feel responsive despite the often energy-sapping presence of tip and tail rocker.

“The changes to this ski are all good, nimble and easy to initiate, yet it charges.  I was blown away by how stable [it was] at speed.”  While this tester was describing the new Kenja, she could have written the same words about its progenitors, implying that the latest iteration has improved without losing the essential properties that made the Kenja practically a brand unto itself among women’s skis.

The 2016 Kenja has a little more surface area to assist flotation off-piste, plus a bit of a boost to its tail dimensions, which helps it see a carved turn through to completion.  Both alterations are beneficial to average skiers, but the Kenja sill saves her best moves for the experts who know how to tilt and push her to extract the most from her potential.

If there’s a condition the Kenja can’t master, it probably doesn’t involve snow.  If you’re an advanced to expert woman who skis everything the patrol will open, you should own a pair of these skis.

Last season, the MX83 received a ridiculous, implausibly high score.  This year it went up.

If the best ski earns the best score, then the MX 83 must be the best ski. Its score percentages are higher than the winning vote margins of African dictators. Most testers who rate it have skied it before; they ski it every year, if only to experience, one more time, what it must be like to ski like a god.

Naturally the MX83 holds like an electromagnet on ice; one expects this from the best Frontside skis and the MX83 doesn’t disappoint.  Somehow it also manages to flow over irregular terrain like it was a liquid instead of a solid. This is how a Frontside ski earns silly-high marks for off-piste performance:  when it’s confronted with deep snow it burrows to the bottom and skis that surface like the loose stuff on top wasn’t there.

This is where we’d normally insert a pithy tester quote that illuminates the special sensation of riding the ski, but the comments on the MX 83 are all slight variations on the same theme, something on the order of, “The finest ski I’ve ever skied, forgiving yet holds like a race ski.”  If you want to read more of the same, just read the last sentence again.

When one distills what makes the MX83 so great down to its essence, it’s the ski’s innate ability to impart confidence bordering on invulnerability.  No matter where you go or how fast you go, you feel as though nothing could knock you off your feet, ever.  Giddy up.

Fischer’s work with the aerospace industry gives them access to cutting-edge technologies like featherweight carbon, and their legendary leadership in the cross-country market has honed their expertise in ultra-light cores, but their very best alpine skis, like the RC4 Worldcup RC, are also their most traditional.

Okay, the construction includes an element of Air Carbon that didn’t exist 20 years ago, but for the most part the RC4 Worldcup RC hews to a classic formula: a wood core bracketed by two sheets of Titanal on one axis and square, ABS sidewalls on the other.  As assembled by a meticulous factory with stringent quality control on every component and process, this enduring design demonstrates that traditional values retain their relevance in today’s what-have-you-done-for-us lately market.

If you pay any attention to the World Cup, you might notice that Austrian GS skis are on the podium ad nauseum.  The RC4 Worldcup RC isn’t as powerful and fall-line focused as a genuine FIS-sanctioned GS, thank goodness, but it gives us mere mortals a sense of what it would be like to have that level of control and authority.  It’s particularly exhilarating to drive through a long, banked turn that can’t be broken loose by boilerplate, wind-blown berms or heavy spring slush.

Give us a shout if you need any additional info about our rentals, demos, lease packages, and products. We’d love to help you find what you’re looking for. Give us a call at 208-726-4501.